The  table and graphs below show average monthly figures for a range of climatic factors over the 30-year period 1981–2010.[1] These figures are measured at the weather station at Rotorua Airport.

Some key points arising from this table:

The following graphs show temperature and rainfall figures in the Lake Rotorua catchment.

Rotorua compared to other growing areas

To provide context of how Rotorua compares with other growing areas in New Zealand, below is a table comparing select climate variables in these areas averaged over the years 1981–2010:[2]

Rotorua’s rainfall of 1342 mm is the highest of the locations listed, but this does not represent the entire catchment well as the Rotorua Airport location receives the lowest rainfall in the Lake Rotorua catchment. Rainfall levels increase moving westward to the Mamaku plateau, which can receive up to 2400 mm per year.

While sunshine hours at 2128 hours annually is in the mid-range of the other regions reported, the lower mean temperature of 13°C results in lower growing degree days, essentially a shorter growing season. This shorter growing season coupled with higher rainfall and hence humidity creates a limiting environment for many horticultural crops.

Although the prevailing windflow over northern New Zealand is west to southwest, winds over the Bay of Plenty region are modified by the local topography.

Wind roses (showing mean annual frequency of surface wind speed and direction based on hourly observations) for four sites in Bay of Plenty are shown below [3]. Winds from the west and southwest prevail at Mt Te Aroha (elevation 951 m) and at Tauranga, while at Whakatane, north-westerly and south-westerly winds are the most frequent.

At Rotorua, the prevailing wind is north-easterly, but winds from between south and west are also common.

The average daily wind speed in Rotorua varies little throughout the year, averaging around 12 km/hr with a slight increase during spring to 13–15 km/hr [4]. 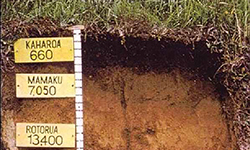